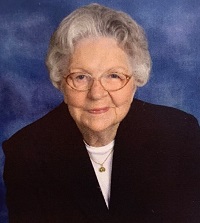 Peggy Bailey Parsley, 90 of Statesville, N.C., went home to be with the Lord on Monday, May 25, 2020, following a full, happy and inspirational life. She was born July 5, 1929 at Walnut Cove, N.C., and was the daughter of Annie Cahill Bailey and John Chambers Bailey, Jr who preceded her in death.

She graduated high school in Stokes County, N.C., and completed her undergraduate degree at Greensboro College with a degree in Home Economics and master’s degree at Appalachian State University with a degree in math education. She was a member of Delta Kappa Gamma Honor Society.
Peggy was a middle school educator for 35 years, including more than 30 years was at Troutman Middle School. She served as a leader in many areas, including as Girl Scouts of America leader, United Methodist Women, American Association of University Women, Statesville Business and Professional Women, N.C. Educators’ Association, National Educators’ Association and Iredell Retired School Personnel. She was a member of Broad Street United Methodist Church, where she served as a Sunday school teacher, member of the choir, board of directors, lay ministry and other active roles in the church community.

In lieu of flowers, the family requests donations be considered to Hospice and Palliative Care of Iredell County or Broad Street United Methodist Church.

Bunch-Johnson Funeral Home is entrusted with arrangements. Condolences may be sent to the family at www.bunchjohnsonfuneralhome.com.