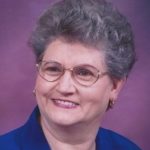 Born in Alexander County, she was the daughter of the late Glenn Johnson and Annie Stine Johnson.
In addition to her parents, she was preceded in death by one brother, Harold Johnson, and one sister, Hilda Motsinger.

Phyllis was strong in her faith, being an avid reader of the Bible, and was a member of Western Avenue Baptist Church.

She retired from Belk after 37 years of service as an auditor, working in the office in Statesville. Phyllis was a loving wife, mother, grandmother, sister, aunt and friend.

Phyllis will lie in state at Bunch-Johnson Funeral Home on Wednesday, April 22, 2020, from 10 a.m. to 12:30 p.m.  A graveside service will follow at 1 p.m. at Iredell Memorial Gardens with Rev. Darren Johnson officiating.

Bunch-Johnson Funeral Home is honored to be serving the Harp family.