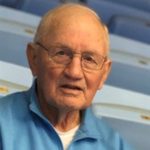 Mr. Smith was a graduate of Troutman High School and attended Mitchell Community College. He worked at Troutman Industries for 20 years and Accuma Corporation in Statesville until his retirement. After his retirement, Mr. Smith worked at the Lazy 5 Ranch as a wagon driver. He lived in Troutman until 1997, where he attended New Perth ARP Church, serving as a deacon and elder.

Mr. Smith moved to Mt. Ulla in 1997 and was currently a member of St. Luke’s Lutheran Church in Bear Poplar, N.C., where he attended weekly Sunday school. He served on the church council, was a member of the Mens’ Bible Class and delivered Meals on Wheels.

A graveside service will be held at 2 p.m. on Monday, June 1, 2020, at St. Luke’s Lutheran Church Cemetery, Bear Poplar, N.C., with Rev. Scott Swix officiating. The family will receive friends one hour prior to the service at the cemetery.

For those who are unable to attend the graveside, you may go to the following link for the live stream
https://www.facebook.com/CavinCookFuneralHomeServices/

Cavin-Cook Funeral Home, Mooresville, is serving the family of Mr. Smith. Condolences may be made to the family at www.cavin-cook.com.