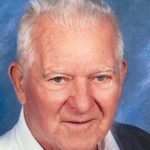 On Thursday, May 28, 2020, Frank Arwood MacLeod, 92, from Mooresville, N.C., passed away peacefully at his Nursing Home in Mooresville. Frank was a devoted husband, father, brother, and grandfather. He was a World War II Army Veteran, where he honed his skills as a large vehicle driver and mechanic. He had a friendly and outgoing nature that served him well the rest of his life and will be very much missed by all who knew him.

Frank was the son of Anton H. MacLeod and Martha S. MacLeod of Windsor, Conn., and Springfield, Mo. He was also the devoted husband of Jennie F. MacLeod from Windsor Locks, where they spent the majority of their lives together. They moved to Mooresville in 1999.

Thanks to Citadel, formerly Genesis, for the wonderful job taking care of both Frank and Jennie for several years. In lieu of flowers, memorials may be made to Living Waters Church, 761 River Highway, Mooresville, NC 28117.

A memorial service for Frank will be held at a future date. His church of worship was Living Waters in Mooresville. The funeral arrangements will be handled by Cavin-Cook Funeral Home in Mooresville.