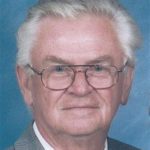 He was a retired truck driver and a member of Command Baptist Church.

Graveside services are scheduled for 2 p.m. on Wednesday, February 19, 2020, at Iredell Memorial Gardens with Chaplain Stephen Vance officiating. The family will speak with friends at the cemetery following the ceremony.

Fond memories and expressions of sympathy may be sent on line to the family to www.nicholsonfunerals.com. Memorials may be given in lieu of flowers to Hospice & Palliative Care of Iredell County, 2347 Simonton Road, Statesville, NC 28625.