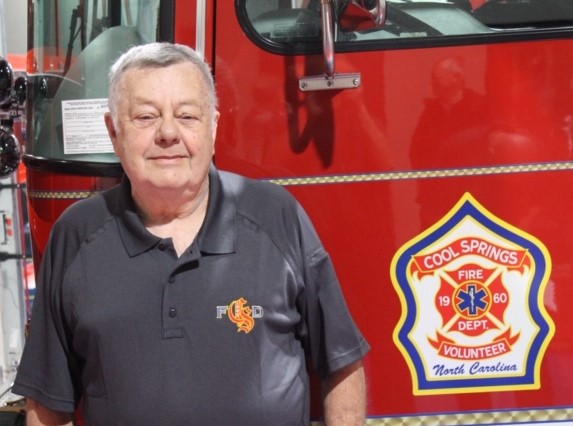 Sonny was born September 30, 1946, in Statesville and was the son of the late Samuel Branson “S.B.” Johnson and Clara Nash Johnson. He was a graduate of Statesville High School and Mitchell Community College. On October 12, 1969, he married Elaine Barkley Johnson, who survives.

He served in the U.S. Army and fought for our country in the Vietnam War. He was a member of St. Paul’s Lutheran Church and served at Cool Springs Volunteer Fire Department for 47 years, having served as Captain. He previously worked for Statesville Flower Mill and retired from Iredell-Statesville School System.

In addition to his wife, Sonny is survived by one daughter, Heather Johnson Norman (Darrell) of Statesville; one grandson, Jacob Norman of Statesville; and one nephew, Justin Plummer of Statesville. He was preceded in death by one sister, Jan Johnson.

Sonny never met a person he could not strike up a conversation with. He loved to sit there and talk about his love for his family or his fire department family. He was one of the most humble, amazing, caring men walking on this earth. Whatever you needed him to do, all you had to do was ask and he would have done his best to get it done. His favorite thing in life was being with his grandson, whether he was watching him on the soccer field when he was little, to taking him to see firetrucks or chasing those trains. As Jacob got older things changed to taking him fishing, hunting or riding with him to Sheetz to get a frozen soda. He just loved spending any amount of time he could with Jacob.

A celebration of life service will be held at a later date and will be announced by Troutman Funeral Home.

Memorials may be made to Cool Springs Volunteer Fire Department, 672 Mocksville Highway, Statesville, NC 28625 or St. Paul’s Lutheran Church. Online condolences may be made to the family at www.troutmanfuneralhome.com