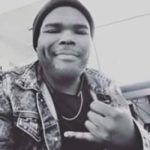 Tye, as he was affectionately called, attended the Statesville City Schools. At an early age, he joined St. Joseph Baptist Church and played the drums at one time. He was employed by Burger King and Cookout. His hobbies included photography and rapping.

He was preceded in death by a brother, Marquise Dalton; grandparents, George and Beulah Johnson Brown; and an uncle, Carl Brown.

Celebration of Life Services will be conducted Saturday, March 28, 2020, at St. Joseph Baptist Church at 2 p.m. Tyree will remain at Rutledge and Bigham Funeral Home, 603 South Center Street, Statesville, NC 28677, until taken to the church to lie in state at 1 p.m.

There will be no public visitation; however, general public viewing will be on Saturday, March 28, 2020, from 9 a.m. until 12 noon Visit the Book of Memories for Mr. Dalton at www.rutledgeandbigham.com.

Unfortunately, with the COVID-19 virus, Rutledge and Bigham Funeral Home, along with other funeral homes across the country, has been issued a mandate to limit the number of family and/or friends at funeral services. You can only enter the funeral with a funeral pass, which will be handed out by the family.

Rutledge and Bigham Funeral Home is serving the family of Tyree Dalton.