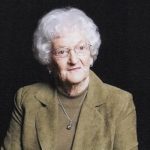 Mrs. Sloan was born August 27, 1926, in Iredell County and was the daughter of the late Andrew and Ava Feimster Boggs. She was a graduate of Harmony High School and on August 23, 1946, she married the late Charles Eugene Sloan, who passed away, December 18, 2005. She was a member of Mount Vernon Baptist Church and previously worked as a Secretary for Grace Park Recreation Center.