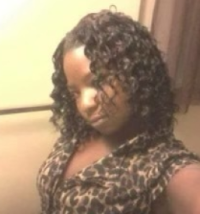 Alexis Monique Murdock, 38, of Statesville, N.C., was born September 30, 1982, to Bernard Borders and Shon Murdock. She departed this earthly life on September 17, 2021, at Forsyth Medical Center in Winston-Salem, N.C. She was preceded in death by her paternal grandparents, William and Eula Mae Borders; and maternal grandparents, James Murdock Jr. and Julia Simpson.

Peaches, as she was affectionately known, was a graduate of Statesville High School.

Celebration of Life Services will be conducted Friday, September 24, 2021, at 2 p.m. at Rutledge and Bigham Mortuary, and burial will follow in the Belmont Cemetery. The family will receive friends from 1:30 to 2 p.m. at the funeral home.

Visit the book of memories for Ms. Murdock at www.rutledgeandbigham.com.

Rutledge and Bigham Mortuary, Statesville, is serving the Murdock Family.