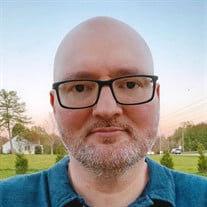 Eric was born in Iredell County on April 20, 1977, and was the son of Joyce Isenhour Josey and the late Richard Josey. He was a graduate of West Iredell High School, and he was married to Lisa Gambrell Josey. Together they shared 21 years before his passing.

Eric was an avid gamer. He enjoyed playing online games, and he especially enjoyed Diablo and WOW. He also enjoyed all of the new technology and if a new gaming station or new phone was released, he had to have it. He simply loved tech stuff. He also loved to watch Cletus on the YouTube channel and Anime.

In addition to his father, Eric was also preceded in death by two nieces, Haley McNiel and Erin Coley, along with his K-9 companion “Otis”.

Along with his mother Joyce and his wife Lisa, he is survived by two sons, Derek Gambrell of Statesville and Shane Josey (Hannah); and due September 26 a granddaughter, Isabelle Josey, of Salisbury. He is also survived by one brother, David Josey II, and sisters, Tami Coley and Donna Josey, all of Statesville, and sister Debra McNiel (Todd) of Stony Point.

A service to celebrate the life of Eric Josey will be conducted at 2 p.m. on Thursday, September 23, 2021 at Abilene Church of Christ and a visitation will follow.

Nicholson Funeral Home is honored to be assisting the family of Eric Josey.