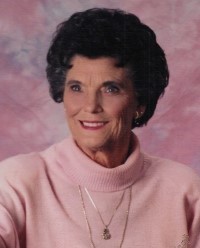 Betty was born February 14, 1927, in Statesville, N.C., she was the daughter of the late William Frank Johnson and Betty Lou Hyman Johnson. She was a 1943 graduate of Statesville High School and also graduated from Mitchell College. In 1946 she married the late Ross H. Gillespie, who passed away November 14, 1988.

Betty worked at Sears as a district secretary until she retired in 1988 and also worked for Johnson Greenhouse until 2018. She was an active member of First ARP Church in Statesville, where she was a Deacon and Sunday School Superintendent. She was a member of Woman Civic Club, American Business Women’s Club and was named Woman of the Year twice.

In addition to her husband, she was preceded in death by one son and daughter-in-law, Thomas F. Gillespie and Nadine, along with two brothers and three sisters.

Funeral services will be held at 2 p.m. on Friday, September 10, at First ARP Church with burial to follow at Oakwood Cemetery.

Memorials may be made First ARP Church or to ALS Foundation at www.als.org.