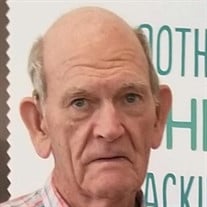 Mr. Jack “Jackie” Edward White, 93, of Statesville, N.C., went home to be with his Lord and Saviour Jesus Christ on Thursday, June 3, 2021, at the Gordon Hospice House.

Jackie was born in Guilford County on September 20, 1927, and was the son of the late William J. White and Sally Spear White. He attended Guilford County schools was a member of Troutman Church of God before joining the Landmark Church of God, where he faithfully attended up until his health would not allow. Jackie was married to Kathleen Darr White and together they shared 49 years of marriage before her passing on July 6, 2016. He later married Carol Dates White, who survives.

Jackie never once hesitated to share the Gospel of Jesus Christ to anyone he met. He knew his mission in life was to make sure every person he met or talked to, regardless of if it was the first time meeting a person or the 100th conversation, heard of the Love of Christ and preparing ones’ heart for eternity. That is the definition of living a Christian Life.

Jackie was a man of many talents. He had many adventures in life. Jackie worked several jobs throughout his life and whatever he did, he did it with passion and a work ethic that was unmatchable. His first job was working on his family’s dairy farm for five years. He later moved to Baltimore, Md., and worked in an airplane factory. He also worked with Pilch Hatchery as a foreman and even sold insurance at a point in his life. Of all the things Jackie did, his passion was gardening and cattle farming. He had a special talent for handling cattle and all farm animals. He planted a garden every year and he would share the fruits of his labor with neighbors. Eventually, Jackie started his own business, Jackie’s Fresh Produce, and he worked out of his van. Jackie would go around Statesville and surrounding areas selling anything from cantaloupes, watermelons, fresh vegetables, and other items. Jackie’s “claim to fame” was his honey. He was known around town as “The Honey Man.” His job allowed for him to meet scores of people and gave him opportunities to share the gospel. Jackie’s journey here on earth may have ended but he now is seeing his reward.

In addition to his parents, Jackie was preceded in death by two brothers, Arel and Loyd White, and two sisters, Lois White and Jean W. Oliver.

A service to celebrate the life of Jackie White will be conducted at 11 a.m. on Wednesday, June 9, 2021, at Landmark Church of God. The family will visit with friends for one hour prior to the funeral service. Burial will follow in the Iredell Memorial Gardens Cemetery.

In lieu of flowers, memorials may be made to Hospice and Palliative Care of Iredell, 2341 Simonton Road, Statesville, NC 28625. Online condolences can be made to the family at www.nicholsonfunerals.com.

Nicholson Funeral Home is honored to serve the family of Jackie White.