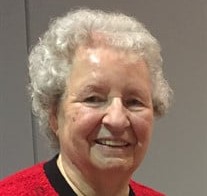 Joan Cornelius Rinehardt, 87, of Mooresville, N.C., passed away on Tuesday, November 23, 2021, at the Gordon Hospice House in Statesville. She was born on March 27, 1934, in Catawba County, N.C., to the late Henry and Ester Huitt Cornelius. Mrs. Rinehardt was retired from Burlington Industries. She was a member of St. Mark’s Lutheran Church in Mooresville.

In addition to her parents, she was preceded in death by her husband, John Lewis Rinehardt.

The family will receive friends on Friday, November 26, from 11:30 to 1 p.m. with a service following at 1 p.m. at Cavin-Cook Funeral Home Chapel with Rev. Dave Keck officiating. Burial will follow the service at Iredell Memorial Park in Statesville.

Memorials may be made to Hospice & Palliative Care of Iredell County, 2347 Simonton Road, Statesville, NC 28625.

Cavin-Cook Funeral Home & Crematory, Mooresville, is serving the Rinehardt family. Condolences may be made to the family at www.cavin-cook.com.