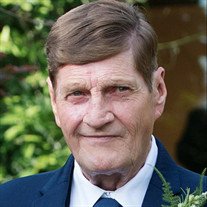 Lexyie had one dream as a child and fulfilled that dream by playing professional baseball from 1965 to 1969 as a pitcher for the Chicago Cubs. He was a veteran who proudly served his country in the U.S. Army. Lexyie had a degree in business and retired from Perdue Farms as an area manager.

Lexyie was a member of Beulah Baptist Church. An avid fan of the Chicago Cubs, the Green Bay Packers and the Tarheels; he also enjoyed reminiscing and telling stories about his baseball days, coaching baseball, fishing, singing and his fur babies. Lexyie was a prankster with a quirky sense of humor, never met a stranger, loved the Lord, and adored his family.

A Celebration of Life Service will be held at 3:30 p.m. at Beulah Baptist Church on Saturday, May 8, 2021, with Rev. Brian Burgess officiating.

In lieu of flowers, memorials may be given to the Lake Norman Humane Society, 2106 Charlotte Highway, Mooresville, NC 28117. Online condolences may be left at www.nicholsonfunerals.com.