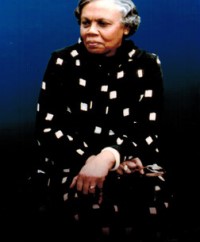 Lillie was a teacher by profession, and always by example. She was a loving aunt, sister, mother, grandmother, great grandmother, and wife of LeRoy Campbell for 73 years.

She was born February 27, 1925, in Hamlet, N.C., to the late Irene McLeod Stubbs and Thomas Howard Stubbs. She spent her early childhood in Hamlet, was educated in the public schools there, and graduated from Capitol Highway High School. She received her Bachelor’s and Master’s degrees with a concentration in Grammar School Teaching from A & T College in Greensboro, N.C. Her professional career was spent entirely in service to the children of North Carolina, teaching one year in Alexander County and the remaining 29 years in Statesville at Morningside Elementary School and later at Pressly Elementary School. She was a Pink Lady volunteer at Iredell Memorial Hospital, an NCTA member, and a lifetime member of the NAACP.

She was a private person who spent most of her non-professional time with her husband, daughters and the large extended Campbell family. She was a member of Mt. Pleasant AME Zion Church, where she sang in the senior choir for many years. She enjoyed travel, sports — especially tennis, basketball and baseball and was the best pinch hitter for the Vacant Lot Club. She loved good books, good food, and good company. She was known for her baking skills, particularly for her lemon meringue pie, and legendary pound cake.

Lillie’s most unexpected trait was her fearlessness. While never rude, she always said exactly what she meant and expected others, students and colleagues alike, to do the same. She was also perpetually ready for an adventure. If you said let’s go, she said, let me get my shoes. If there was a new place to visit, she was the first to go. If you told her staying at home was enough, she would remind you that wider horizons made for better minds. She was always working toward better minds — especially for her students. Her insistence on providing the best she could provide as a teacher and, in turn, expecting the best from her students made for consistently good outcomes for the numerous classes she taught over the years. Many of her students only fully appreciated her after the fact when they found themselves using, in many situations, and even as adults, things they had been taught by their most demanding elementary school teacher.

She will be missed.

A Graveside Service will be conducted Sunday, August 1, 2021, at 1 p.m. at Belmont Cemetery.

Rutledge and Bigham Mortuary, Statesville, is serving the Campbell Family.