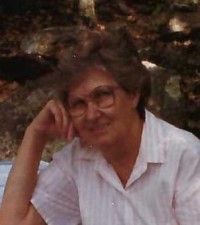 Marie Colvard Stafford, 94, of Rougemont, N.C., and formerly of Statesville, N.C., passed away at her residence on Friday, February 26, 2021. Born in Watauga County, N.C., on October 11, 1926, she was the daughter of the late Hardy Lee Colvard and Nettie Hodges Colvard.

In addition to her parents, she was also preceded in death by her sister, Helen Gill, and one son, Lloyd Garris.

Mrs. Stafford was a former member of Diamond Hill Baptist Church and retired from J.P. Stevens as a seamstress.

A graveside service will be held Thursday, March 4, 2021, at 2 p.m. at Oakwood Cemetery with Rev. Tim Tucker officiating. The family will speak to friends following the service.

Condolences may be left for the family online at www.bunchjohnsonfuneralhome.com.

Bunch-Johnson Funeral Home is honored to be serving the Stafford family.