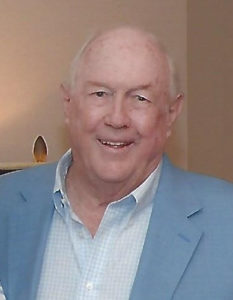 In the early morning hours of Wednesday, October 5, 2022, Arthur Julius “A.J.” Barbee completed his earthly journey, joining his beloved wife Jerry. A.J. was born May 30, 1932, in Durham, N.C., and was the son of Arthur Julius and Macie Maynard Barbee.

A.J. was a graduate of Durham High School, Class of 1951. Following graduation, he enlisted in the U.S. Navy, serving active duty aboard the USS Franklin D. Roosevelt during the Korean conflict. Upon completion of service to his country, A.J. married his high school sweetheart, Jerry. They enjoyed 68 years of marriage before her passing on July 24, 2022, and were blessed with four daughters. In 1953 A.J. joined McLean Trucking Company with whom he was employed for over 30 years. During their years spent in Statesville, A.J. was an active member of First Presbyterian Church, where he served as a deacon and the Statesville Kiwanis Club. In 1983, A.J. and Jerry relocated to Elizabeth City, N.C., where he continued his sales career with Consolidated Freight and he eventually retired from Yellow Freight Systems. Upon retirement, they resided in Nags Head, Beaufort, N.C., and Roaring Gap, where they enjoyed golfing, boating and spending time with friends.

A private Celebration of Life Service will be held at First Presbyterian Church of Statesville at a later date. The family is appreciative of the excellent care, love and support provided in A.J.’s final days by Gordon Hospice House. Those wishing to make memorials may consider First Presbyterian Church of Statesville, The Gordon Hospice House or OcraCats (www.ocracats.org).