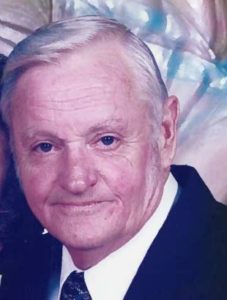 Bernie served our country in the United States Army during the Korean Conflict. He worked as a district manager for Run In Foods for many years prior to his retirement. Bernie enjoyed meeting people, was an avid NASCAR fan, and enjoyed working in his yard.

Left to cherish his memories are his wife of 35 years, Katherine Bustle Beasley; two daughters and a son-in-law, Toni and Van Snow and Kim Beasley; a stepdaughter, Kim Goodin; a stepson and his wife Jasper and Angel Rupard; two grandsons, Brandon Snow and Luke Beasley; three stepgrandchildren, Austin, Landyn, and Paige; and several nieces and nephews.

In addition to his parents, Mr. Beasley was preceded in death by a stepson, Brian Goodin; a sister, Iva Surratt; two brothers, Moyer Beasley and Vernon “Doodle” Beasley; and two nephews, Gary Surratt and Kenneth Surratt. The funeral service will be held Sunday, June 5, 2022, at 2 p.m. at Moody Funeral Home Chapel in Mount Airy, with the Rev. Donnie Hooker and the Rev. William Wease officiating. Burial will follow in the New Hope Baptist Church Cemetery, with military honors conducted by the VFW Memorial Honor Guard. The family will receive friends Sunday from 1 until 2 p.m. at the funeral home.