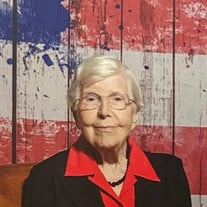 Lillie Christine Childers Williams, 99, of Mooresville, N.C., passed away on Friday, April 29, 2022. She was born on November 9, 1922, in Rowan County to the late Walter Augustus “Gus” and Alma Jones Childers.

Christine graduated from Harrisburg High School in 1940. She was very patriotic. During World War II, she was in the Women’s Army Corps from 1943-1945, stationed in Fort Myers and Daytona Beach, Fla. She was proud of the contribution she and four of her brothers made in service to the United States military. The family will be dressing in red, white, and blue in her memory. Christine was a longtime member of Liberty Baptist Church, Mooresville.

The family would like to extend a special thanks to the staff of the S. Mitchell Mack Hospice House for the loving care that Christine received during her illness.

A Celebration of Christine’s life will be held on Monday, May 2, at 4 p.m. at Liberty Baptist Church with Pastor Eddie Graham officiating. Visitation for family and friends will be one hour prior to the service from 3 to 4 p.m. Burial will follow the service at Glenwood Memorial Park.

Cavin-Cook Funeral Home and Crematory, Mooresville, is serving the Williams family. Condolences may be sent to the family at www.cavin-cook.com.