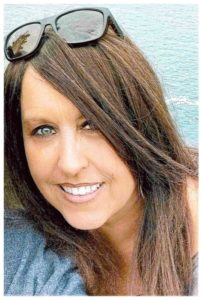 Christy Hill Fox, 52, of Statesville, N.C., entered the heavenly gates on Sunday, November 20, 2022. She was surrounded by her family following a two-year battle with Adrenal Cancer.

Chris was born August 7, 1970, in Charleston, W.Va., to the late Gilbert Hill and Frances Hawkes Hill. She was a graduate of North Iredell High School and attended Mitchell Community College. On October 3, 1992, she married Bradley Fox, and together they had two wonderful children, Luke in 1995 and Lacey in 1996. Chris went to work for Wachovia Bank in 1989 and worked there until her second child was born; she then became a stay-at-home mom. She returned to Wachovia in 2000 before accepting a position with Dr. Mark Dale (DDS) in 2001. Chris worked as a dental receptionist as well as a fill-in dental assistant until Dr. Dale’s retirement in 2019. She worked as the office manager for Maple Springs Dental until her diagnosis in June of 2020.

Chris enjoyed spending time with her family, especially at Lake Lookout and the beach. She was a member of Front Street Baptist Church for more than 30 years and a member of the Friends and Family Sunday School Class.

In addition to her parents, she was preceded in death by her brother, Donald Hill.

Those left to cherish Chris’ memory, in addition to her husband, Brad Fox, are her son, Luke Fox of Statesville, her daughter Lacey Fox of Statesville, one brother, Gilbert “Buzz” Hill (Ann) of Pratt, W.Va., her sister, Nancy Hill Sanders of Statesville, and her aunt, Cathy Hawkes Fox of Smithers, W.Va. Chris is also survived by several nieces and nephews, as well as her best friend, Tonya Little (Heath) – all of whom she loved dearly.

The family will visit with friends from 1:30 to 3 p.m. on Friday, November 25, 2022, at Front Street Baptist Church, 1403 West Front Street, Statesville, N.C. A celebration of life will be held at the church at 3 p.m. Pastor Tim Stutts will officiate. Burial will follow the funeral at Oakwood Cemetery.