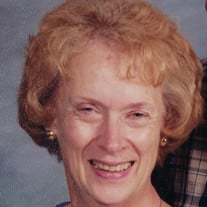 Eunice Blanche Cobb Kellogg, 83, of Statesville, N.C., passed away on Thursday, January 13, 2022, at Maple Leaf Health Care in Statesville. Born on August 4, 1938, in Newark, N.J., she was the daughter of the late Walter Cobb and Alice Weeks Cobb.

Mrs. Kellogg graduated from Nyack Christian College and Oneonta States Teachers College with a master’s degree in education. Her career included teaching elementary education in Buffalo, N.Y. and in Germany on Darmstadt military base, physical education at Elmira College in New York, and she was one of the first four teachers at Statesville Christian Academy.

Eunice and her husband Robert were members of Western Avenue Baptist Church, where she shared her passion for singing in the church choir. She also sang in the choir while attending Nyack Christian College.

In addition to her parents, Walter Cobb and Alice Weeks Cobb, she was preceded in death by her brother, David Cobb.

A graveside service in her memory will be held in late Spring of 2022 in Cander, N.Y.

The family would like to thank the staff at Maple Leaf Health Care for the care and compassion they provided to Eunice while she was in their care.