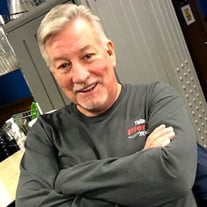 He was born on June 5, 1959, in Danville, Va., to the late James and Joann Shepherd Harsey. Jim was a veteran, serving in the U.S. Air Force. He was employed with Talley’s Pier 77 in Cornelius, N.C. Jim loved playing the guitar and was passionate about his family. He enjoyed watching sports, especially football which he played in school, and he was an avid Carolina Panthers fan.

The family will receive friends on Thursday, May 12, from 2 to 4 p.m. at Cavin-Cook Funeral Home with a graveside service following at 4:30 p.m. at Williamson’s Chapel United Methodist Church Cemetery.

Cavin-Cook Funeral Home & Crematory, Mooresville, is serving the Harsey family. Condolences may be made to the family at www.cavin-cook.com.