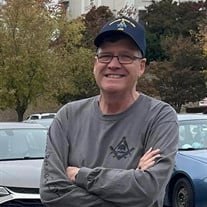 Jim was born on September 23, 1960, in Roanoke, Va., to the late William Vander Wallace and Anne Viola Rhodes Reid Wallace. He was a member of Mooresville Masonic Lodge 496, where he served as an officer of the lodge and was a dedicated brother. Jim was also a member of the Buffalo Creek Sportsman Club in Statesville. He worked in the Information Technology industry spanning from Scrum Master/Process Improvement to Systems Testing and Development. Most recently, he worked for Cognosante with prior careers at Lowe’s, Michael’s stores, Sallie Mae and independent contracting. He cherished his time spent with family and friends and was exceedingly proud of both of his daughters. He enjoyed time spent at home testing new recipes and perfecting the use of his smoker. His strong faith was further enhanced by his relationship and involvement with the Masonic Lodge.

In addition to his parents, he was preceded in death by his brother, David Reid.

There will be no services held at this time.

In lieu of flowers memorials may be made to the Masonic Foundation at mfnc.org.

Cavin-Cook Funeral Home and Crematory, Mooresville, is serving the family.