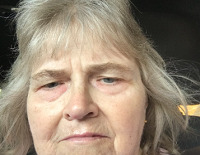 Mrs. McDaniel was born in Asheboro, N.C., on August 9, 1956, the daughter of the late Clyde Hicks and Edna Holbrook. She was also preceded in death by her brother, Ray Hicks. Joanne attended North Iredell High School and was retired from JC Penney Warehouse.

A funeral service celebrating the life of Joanne McDaniel will be conducted at 2 p.m. Thursday, September 29, 2022, at Troutman Funeral Home Chapel. The family will visit with friends from 1 to 2 p.m. prior to the service. Burial will follow the funeral service at Iredell Memorial Gardens. Online condolences may be made to the McDaniel family at www.troutmanfuneralhome.com.

Those wishing to make memorials are asked to consider Gordon Hospice House of Statesville.