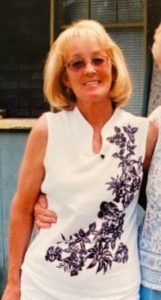 Patricia Ann Douglas Knight, 71, of Liberty N.C., passed away peacefully at home on April 2, 2022. She was a devoted mother, grandmother and Nanny.

Patricia was born June 2, 1950, to the late Charles E. and Doris Russell Douglas, in Titusville, Pa..

The family would like to give special thanks to the staff of Hospice of Randolph & Hospice of the Piedmont for their love and support.

Fond memories and expressions of sympathy may be shared at www.bunchjohnsonfuneralhome.com for the Knight family.

Bunch-Johnson is honored to be serving the Knight family.