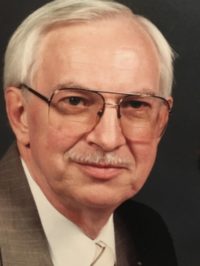 Bob grew up and attended schools in Buffalo, N.Y., and later moved to Rochester, N.Y., with his young family where he began a career as a public accountant. He enjoyed music, learned to play several brass instruments as a young man and sang tenor in church choirs. His hobbies included puzzles, paint by number, building model train sets and constructing beautifully furnished dollhouses (with wife Ruth) for their grandchildren. Bob loved being on the water, sailing on Silver Lake, N.Y., in his youth and taking friends and family out on the pontoon boat at Bob and Ruth’s home on Lake Conesus, N.Y. Family connections and history were important to Bob. He enjoyed the annual Crane and Van Note family reunions and maintaining family ties.

A celebration of his life will be planned for next summer in Western New York. Donations may be made in his memory to the American Heart Association or the American Cancer Society.