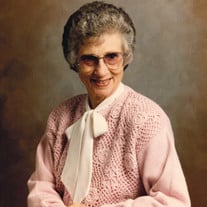 Ruth Ellen Wagner Krohne, 97, of Mooresville, N.C., passed away on Thursday, October 20, 2022, at Maple Leaf Health Care in Statesville, N.C. Born January 9, 1925, in Fort Wayne, Ind., she was a daughter of the late Noble and Mary Henline Wagner.

Mrs. Krohne spent her formative years in Allen County, Ind., where she attended Central High School in Ft. Wayne. She was a homemaker, devoting her time to her young children. She was active in the school PTA and was a wonderful seamstress who made her children’s clothing when they were young. She also directed the church choir at a little country church in Indiana, where she was a beautiful singer.

After living a short time in Colorado, California and Florida, the family returned to Indiana in 1968, residing in Whitley County. Years later, due to declining health, both daughters shared in her care, enabling her to live at home as long as she was able.

A private memorial service will be held at a later date. The family would like to sincerely thank the Staff of The Greens at Maple Leaf, Statesville and Hospice of Iredell County for their love and care given to Ruthie during her residency there.

Cavin-Cook Funeral Home, Mooresville, is serving the family of Mrs. Krohne. Condolences may be made to the Krohne family at www.cavin-cook.com.