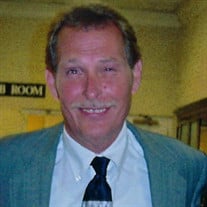 Terry Lynn Chapman, 59, of Statesville, N.C., passed away on Monday, January 10, 2022, at the Gordon Hospice House. Born on January 29, 1962, in Iredell County, N.C., he was the son of the late Phillip Avery Chapman and Geneva Presnell Chapman.

Terry worked at Mack Molding Company for over 25 years. He had a passion for working on cars and had a love for his 1957 Bellaire.

In addition to his parents, Terry was preceded in death by his sister, Tanna C. Shives.

Those left to cherish his memory include his brother, Larry Chapman; his nieces, Kamie Pitts and her husband Chris, and Miranda Shives; and his great-nieces and great-nephew, Preston, Kaitlyn and Mary-Catherine.

A Graveside Service will be held at 11 a.m. Saturday, January 15, 2022, at Three Forks Baptist Church Cemetery in Taylorsville with Pastor Michael Pharr officiating.

In lieu of flowers, memorial contributions may be made to the Gordon Hospice House, 2341 Simonton Road, Statesville, NC 28625.