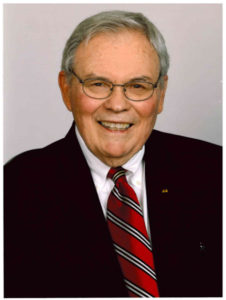 Tom was born on March 25, 1939, in Jackson, Mich. He was the son of the late Lottie Lee Eblen Gish and Henry Herman Gish. He was a 1957 graduate of Jackson High School and a 1962 graduate of Western Michigan University, where he was a member of Tau Kappa Epsilon fraternity, He faithfully served his country in the Michigan Air Nation Guard. He married his wife Beverly in 1985, and together they shared more than 35 years of marriage. Tom’s career was with Clark Equipment Company, where he held managerial and administrative positions, including an assignment for two years at TREMEC in Queretaro, Mexico. During his time at TREMEC, he founded Michigan Export Company in Jackson, Mich. He transferred to North Carolina in 1983 with Clark Equipment. Tom was a devoted husband, father, grandfather, and friend.

A funeral service will be conducted at 2 p.m. Wednesday, December 14, 2022, at Troutman Funeral Home Chapel. Burial will be at a later date in his hometown of Jackson, Mich.

The family extends special thanks to Carolina Caring Hospice for their support during Tom’s long fight with Multiple Sclerosis.

In lieu of flowers, those wishing to make memorials are asked to consider the National MS Society, Carolina Caring or to the charity of the donor’s choice.