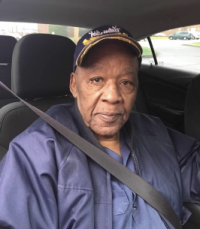 Mr. Vernon Keaton, 94, of 534 Broadway Court, Statesville, N.C., passed away at his residence on Thursday, February 24, 2022. He was born in Iredell County on February 25, 1927, and was the son of the late Curtis Keaton and Effie Woods Keaton. He was united in marriage to Mrs. Catherine “Cat” Reid Keaton, who preceded him in death. Two daughters, Mrs. Glady Mae Keaton Daniels and Ms. Sylvia Keaton; a grandson, Keith “Big Boy” Keaton; a great grandson, Lemar Daniels; and his in-laws, Mr. and Mrs. Harold Sherrill, also preceded him in death.

He was employed by Southern Screw for many years and served with the United States Navy during World War II. He was a member of St. John Baptist Church.

Celebration of Life Services will be conducted Monday, February 28, 2022, at 2 p.m. at Christian Outreach of the Piedmont. Pastor Glenn Usry will officiate and burial will follow in the Belmont Cemetery with Military Rites.

Mr. Keaton will remain at Rutledge and Bigham Funeral Home until taken to the church to lie in state at 1 p.m. Members of the family will receive friends at the church from 1 until 2 p.m., but will assemble at the residence at other times.

Visit the Book of Memories for Mr. Keaton at www.rutledgeandbigham.com.

Rutledge and Bigham Funeral Home is serving the Keaton Family.