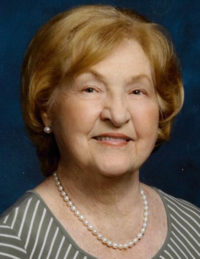 She was born on September 10, 1937, to the late John Claxton and Blanche Millsaps Weber. JoAnne grew up on a dairy farm on Snow Creek Road in Iredell County, N.C., where she grew to love nature and music. She graduated with degrees in music from Mars Hill University, where she served as the first female chairperson of the Board of Trustees, and from UNC Greensboro, where she graduated with a vocal performance degree. She taught voice at Mitchell Community College, where she was the director of the Mitchell Community College Choir. Not only was she a gifted vocalist, blessing many in the Statesville community with her soprano voice, but she was also a gifted watercolor artist, flower arranger, and gourmet cook. She strove for excellence in all that she did, inspiring other musicians and artists along the way. Her energy lit up the room and her hospitality and mentorship were felt by family and friends. At heart, she was a teacher and performer. She performed in “The King and I” at the Statesville Playhouse Theatre along with many other leading roles in other performances. She also led the Mitchell Community College Choir on a European tour. She owned and operated Statesville Travel Service and founded Video Teaching Aids Inc., which took her on many adventures in the United States and around the world. She was an active member of First Baptist Church, where she sang in the choir, served as a deacon, and led a women’s missions program.

In addition to her parents, JoAnne was preceded in death by her brother, Robert “Bob” Weber; and sister-in-law, June Weber.

The family would like to thank Sherrie’s In-Home Care for their loving care of JoAnne in her later years.

Please make memorials to the JoAnne Alexander Scholarship at Mars Hill University, P.O. Box 6792, Mars Hill, NC 28754 or the Music Department at Mitchell Community College. Online condolences may be made to the family at www.troutmanfuneralhome.com.