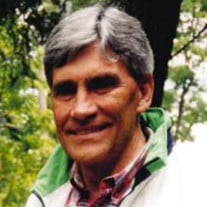 He married the former Carole McKay at St. Helena’s Catholic Church, Sherrill, N.Y., a union of 55 years. He was born in Scranton, Pa., the son of the late Peter and Bertha Chesko Slavinski. He attended the University of Scranton, transferred to the University of Detroit, Mich., where he graduated with a B.S. degree in Electrical Engineering. He received a MSEE degree from Syracuse University. He was employed as a supervisor electronic engineer at the Air Force Research Laboratory, Rome, N.Y., retiring after 39 years of service.

He was preceded in death by his beloved brother, Stanley; in-laws, Howard and Gladys McKay, and Brian McKay.

He was a loving husband and father who enjoyed snowmobiling, fishing with his brother Stan, and reconditioning Corvette cars. He was the ultimate handyman. He was a member of the former St. Ann’s Church, Whitesboro, N.Y., and active in the Whitesboro Boy Scouts of America.

Interment will take place in New York in late spring.

The family sincerely appreciates the outstanding care provided to Richard by the staff of the S. Mitchell Mack Hospice House in Mooresville and Iredell County Hospice.

Cavin-Cook Funeral Home and Crematory, Mooresville, N.C., is serving the Slavinski family. Condolences may be made to the family at www.cavin-cook.com.