I’ve never met 7-year-old Bryson Patton, but after watching his performance this week at Scotts Elementary School he’s become one of my favorite little people on the planet.

One of our readers, Sara Connolly, attended the K-2 Christmas Program at Scotts on Thursday night. What she saw on the stage made her heart so happy that she asked us to share Bryson’s “pure unadulterated joy for some Christmas music” with our audience.

So here it is: 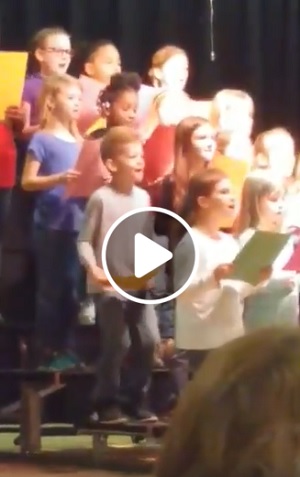 How awesome was that!

Bryson’s parents, Larin and Alex Patton, who attended the show with their other son Charlie, had no idea that Bryson was going to bust out these moves during the second-grade performance.

But they weren’t totally surprised. Bryson loves music — he can play guitar and sing a wide range of hits from Bruno Mars to Keith Urban. He even went through a Michael Jackson phase as a 3 year old.

“He dressed like him for a few years and learned all of his songs and dance moves,” Larin told me. “He loves all kinds of music!!!

Bryson is at the perfect school to feed his passion for singing and dancing. Scotts Elementary, one of the choice programs in Iredell-Statesville Schools, is an A+ Arts Integrated School. You can learn more about this outstanding curriculum at https://scotts.issnc.org/about-us/a-school

Whether Bryson was moved by the music or the Christmas spirit, his performance was definitely the best thing I saw this week.

Mike Fuhrman is the editor of Iredell Free News. He has no musical talent. You can contact him at
iredellfreenews@gmail.com