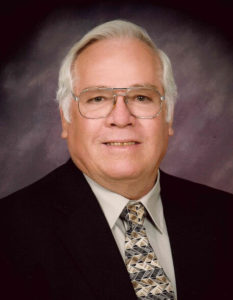 Jerry Dale Sherrill, 81 of Statesville, N.C., went home to be with his Savior. He passed peacefully at home with his family surrounding him on Sunday, December 11, 2022.

Jerry was born in Iredell County, N.C., February 14, 1941. He was the son of the late J.W. Sherrill and Vernie Bell Sherrill. He was a graduate of Scotts High School. On October 16, 1965, he married the love of his life, Judy Deal Sherrill, who survives. They just celebrated their 57th anniversary in October. Jerry served his community as a former volunteer firefighter with Wayside Fire Department and served in the N.C. National Guard.

Jerry was a faithful servant of Christ. He was a former member of Diamond Hill Baptist Church for many years and a current member of Western Avenue Baptist Church. He served the Lord in many capacities, including Sunday School teacher, treasurer, superintendent, Deacon and for many years drove a bus for the church bus ministry.

As a young boy, Jerry rode his bike and delivered newspapers. As he got older, he was a mason and began his career with his dad’s company, J.W. Sherrill Masonry. When his dad retired, he and his late brother Jim started J&J Masonry.

Once Jerry and Judy retired, they spent many years traveling with Christian Tours. He enjoyed traveling to see God’s beautiful creation. Along with the tours, they loved Oak Island, Pigeon Forge, Tenn, and trips with Western Avenue Baptist’s Young at Heart. He loved traveling with his family as much as possible. His granddaughters were very special to him, and he loved watching them play sports and hanging out in the pool and making homemade ice cream with them. Some of Jerry’s favorite pastimes were gardening (and sharing his harvest), yard work and mowing, and spending time in his “man cave.”

Along with his parents, Jerry was preceded in death by his brother, James “Jim” Sherrill.

In addition to his wife Judy, he is survived by his four children, all of Statesville, Jeff Sherrill, Teresa and Darrell Summers, Jody Sherrill (Debra), and Tamara Sherrill; and his fur baby “Little Bit.” He had three precious granddaughters, Taylor Summers, and Macy and Maggie Sherrill. He is further survived by his sister, Cindy Kress and her husband Kenneth, and several nephews.

The family would like to give special thanks to Iredell Home Health Care Staff, Hospice of Iredell County, Bobbie, Sara, Aaron Macemore and Leandra for the care provided to Jerry.