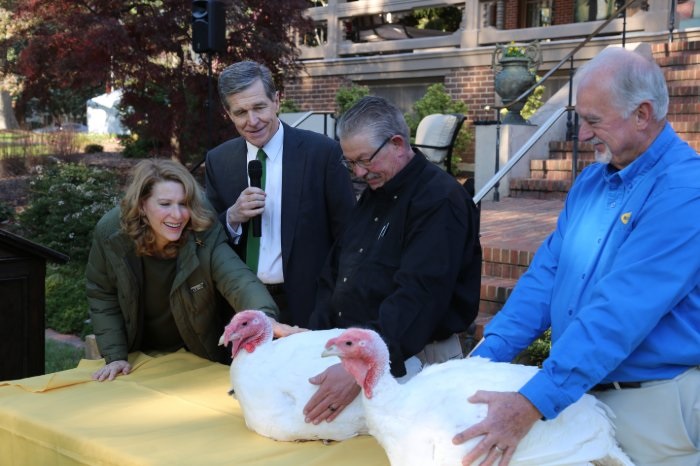 In his remarks, Gov. Cooper remarked on the importance of gratitude, and his own thankfulness for the many educators, first responders, military servicemembers and public servants here in North Carolina.

Cooper pardoned Orville and Wilbur, two 45-pound toms from Toy Farms in Clinton. After the ceremony, Orville and Wilbur will retire at Naylor Family Farm in Fuquay-Varina, where they will join chickens, peacocks, goats, pigs and calves.

“Last year set a high bar for how many Thanksgiving-related dad jokes I could make, and many folks told me I couldn’t possibly top it. To that I say, ‘I cran and I berry well will,’ ” Gov. Cooper said. “But beyond the jokes, Thanksgiving provides an opportunity to reflect on the many things we have to be thankful for – and I’m grateful to our first responders, educators, military servicemembers and dedicated public servants working every day to make North Carolina safer and more prosperous.”

On Friday, November 22, Gov. Cooper will join representatives from the Food Bank of Central and Eastern North Carolina and Butterball to help distribute turkeys to local agencies serving families in need.

“Butterball is honored to raise the two turkeys presented to Gov. Cooper for North Carolina’s turkey pardon. This pardon is a fun tradition to recognize North Carolina as the second largest turkey producing state, and we’re proud to be a North Carolina-based company representing our turkey industry,” said Jay Jandrain, president and CEO of Butterball. “We’ll also be donating 400 Butterball turkeys on behalf of Gov. Cooper to the Food Bank of Central and Eastern North Carolina to help put a hot meal on North Carolina tables this Thanksgiving.”