Painted bright yellow with black lettering, the large spirit rock outside of the former Brawley Middle School in Mooresville has proclaimed “Black Lives Do Matter” for about three weeks.

Over the next few days, as Iredell-Statesville Schools prepares the facility to house the district’s new International Baccalaureate (IB) school, the message on the spirit rock will be replaced.

“This weekend, they are going to paint the rock with the new logo with the new school, just to get everyone going and excited for the new school year,” said Boen Nutting, the school district’s director of communications and development. 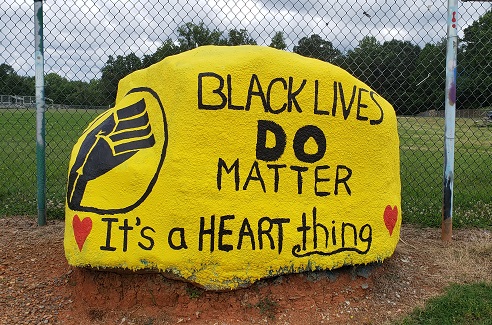 The current message, which also includes the phrase “It’s a heart thing,” was painted by a family with several students in district schools, Nutting said.

Normally, messaging on spirit rocks at district schools must adhere to specific guidelines set by each school. However, this summer’s relocation of Brawley Middle and renovations left the spirit rock at 132 Swift Arrow Drive in Mooresville unattended and open for its latest creation.

Mount Mourne IB takes over the former BMS facility to become The Brawley School – An IB World School this fall as the middle school finds a new home and name as Woodland Heights Middle School.

Since the “Black Lives Matter” message was added, I-SS has received plenty of feedback from the community.

The Brawley School will continue Mount Mourne IB’s spirit rock policy, which is guided by the school’s Parent-Teacher-Student Organization (PTSO). That policy requires reservations for painting the rock as well as a $15 fundraising fee. Neither of these measures were taken for the rock’s current display.

The PTSO approves messaging for its rock, encouraging celebratory wishes for birthdays and accomplishments while avoiding political commentary.

Former Brawley Middle and now Woodland Heights Middle Principal Jimmie Dancy noted that the Brawley School Road facility did not have a formal policy in place for its spirit rock.

“I never had any rules regarding what was painted on the rock because I never thought someone would paint something that was not school related. We will have rules for painting the rock at Woodland Heights.”

During Dancy’s tenure at Brawley Middle, the rock was only repainted by school officials once due to profanity.

In the coming days, the spirit rock on Brawley School Road will be redecorated with the new school’s colors and logo. Nutting added that this makeover was not at the direction of I-SS administration nor is it a response to the content of the current message, but rather a planned change to mark the opening of the IB school and the new school year. Parents and students were sent an email noting the rock’s rules for repainting.

“We fielded a lot of phone calls about it. The fact of the matter is, we’re all about the business of educating children and we needed to get that policy back in place for that rock,” Nutting said. “It’s a spirit rock and we want to be able to celebrate children’s birthdays and accomplishments.”