Nearly two years after potentially harmful vapors associated with a dry-cleaning solvent were found in the air in the children’s section, the county has completed remediation work and major renovations at the Iredell County Public Library.

The staff at the Statesville library has reopened the children’s area and will hold a grand reopening event on Friday, February 21. The event will be held in conjunction with the Iredell County Board of Commissioners winter retreat.

Commissioners approved remediation work and renovations, which cost a total of $408,810, in the face of public health concerns after vapors containing tetracholoroethylene, also known as perchloroethylene or PERC, were found in the lower level in April of 2018. According to the Agency for Toxic Substance and Disease Registry, “the U.S. Environmental Protection Agency has determined that PERC is likely to cause cancer in humans.”

Trace amounts of the chemical — considered below the level deemed unsafe were found — during follow-up testing, which led commissioners to approve the remediation work.

“Nothing was dangerous, but with it being a public building there weren’t any recommendations on what to do,” Executive Library Director Juli Moore explained.

The project included taking out the front wall of the library and removing all of the flooring and applying a barrier and sealant to prevents vapors from passing through the floor. The state dry-cleaning solvent team will continue to monitor and test the area to ensure the barrier is working, county officials.

Library officials are excited to show off work done throughout the building.

“We’re inviting the public to drop in and see the changes that we’ve made. We’re going to give tours of the public area and a behind-the-scenes tour of the staff areas,” Moore said.

At the reopening event, the staff will also give visitors an up-close look at how books and new materials are processed and learn more about the Cardinal resource sharing system.

Moore said they value their patrons and children, and are excited for them to experience the new Youth Services Department and other changes.

Visitors will also notice a new look and feel to the other levels of the library. Improvements include a new location for the Friends of the Library book sale, new book displays throughout, reorganization of foreign language offerings, and layout of other books and social/quiet spaces for studying and seating for children upstairs.

In addition to the various library services and growing number of programs, the library now has a vending machine inside. Guests are allowed to have a snack like item and drink while inside the library.

While walking down the stairs into the department, visitors will immediately notice the bright color scheme. The new colors consist of greys, blues and greens.

The aim during renovations, Moore said, was to make the lower level light, airy, convenient and comfortable.

The gray carpet squares have vibrant color splashes throughout the design.

The flooring is the same as the carpet found in the county’s public safety complex. Moore said that it was a good choice because the individual squares can be pulled out and replaced when needed.

One new enhancement is a rolling book display, which provides young readers with an easier way to select something to read as they can see the front cover of several books at one time.

Another upgrade is flexible seating furniture that allows kids to choose where they read. It also allows them to change their location and position as needed.

“We wanted to be able to move things around to make the space look different,” Moore said.

Additionally, there are study cluster areas with two computers and space on the other side for kids to spread out, as well as café tables and round table areas.

Another improvement is a more defined space for teens and children. Moore explained it keeps teens together to have teenage conversations in one area and younger children in the other area.

It was an idea she had years ago when she served as the youth services manager, but was unable to implement because of the layout. 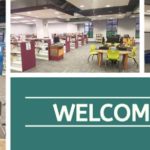 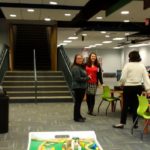 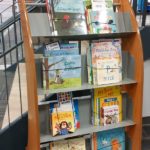 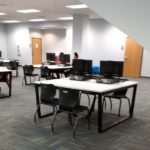 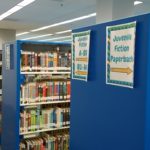 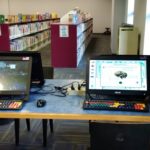