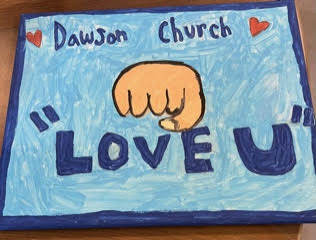 Dawson’s large family, including his father, former Troutman Fire Chief Allen Church, mom Karen, sister Leela, and grandmother Christine Rogers, entered the service to Dawson’s favorite song, Mark Morrison’s “Return of the Mack,” a song about overcoming the pain after the loss of someone he loved.

Pastor Wesley Morris, who also serves as the Troutman Fire and Rescue chief, opened the service, noting that Dawson loved football, hunting, fishing, going to the river and spending time with his buddies.

The SIHS football team and his coaches over the years sat in a place of honor to mourn the promising SIHS sophomore, who wore #37 and dreamed of playing college football after earning the JV Defensive MVP recognition this year.

“He was not afraid of anybody, any time. He would take on the biggest opponent,” said Morris.

Dawson grew up surrounded by the love and nurturing of his family and friends.

Though lacking time to recount all their special memories with Dawson, Morris described Dawson as a young man who loved his family, fist-bumping them each night while saying he loved them. The growing young man’s favorite question was: “What’s to eat?”

Dawson, whose younger sister Leela called “Bubba,” took Leela with him most everywhere, even squirrel hunting, although Leela swore it was to make her carry or do things for him.

Grandmother Christine was especially close to Dawson, taking him to and from school each day because he hated riding the school bus.

Jim Donaldson coached Dawson from age 5 in youth baseball, wrestling, and football, including during his middle and high school years. He described Dawson as a great athlete who put his team first, sometimes playing positions he did not prefer because it was best for the team.

Donaldson also described Dawson’s “contagious smile,” beaming on his face whether he was getting fussed at or praised. He thanked the Churches for raising such a great son, loved by coaches, teachers, teammates, and his close-knit group of friends, all of whom are painfully grieving Dawson’s loss.

Kayla Phillips said Karen Church longed to have children and delighted in the birth of her “perfect” baby boy in 2006. The pair adored each other, remaining close through his turbulent teen years.

Dawson also adored his baby sister’s arrival and was thrilled to be a big brother. Karen taught both children to be safe and to act in a loving and caring way to others.

“I have no words to heal a broken heart. Only love can fill the hole left” by Dawson’s loss, concluded Phillips.

Morris next offered words of comfort to the family, using the “#LLD” hashtag seen on many posts about Dawson on social media. Though it signified “Long Live Dawson,” Morris noted that it also had another meaning: “Live, Love, Dying.”

Morris noted the many times all three of these words appear in scripture and these words should reflect everyone’s experience. He urged listeners to live life fully and with love as Dawson did, but to remember that death is appointed for all, with hope available through Christ’s salvation of mankind.

In the closing prayer, Morris expressed thankfulness for Dawson’s life, contagious smile, and grit, though questions and confusion about this tragic loss fill everyone’s mind and heart. He asked for prayers and comfort for Dawson’s family and friends as they endure a roller coster of emotions in the coming hard days.

The service’s music reflected Dawson’s life and personality, including Hardy’s country song, “Give Heaven Some Hell,” Alabama’s “Angels Among Us,” and Casting Crowns’ “Scars in Heaven.”

As the emotional football team members exited, they placed white carnations on Dawson’s casket as Jordan Feliz’s hopeful song, “Keep Your Head Up, Jesus is Coming Back,” played.

Before the casket was closed for the final time, Karen Church embraced her son and held his hand one last time, her grief manifesting the sorrow and tears of hundreds as the service ended.

On Friday, December 31, South Iredell High School’s Fellowship of Christian Athletes will hold a candlelight vigil honoring the life of Dawson Church at 6:30 p.m. in the football stadium.  This ceremony is open to the public.  At this vigil, information will be available about the grieving process, and the FCA is organizing local churches to have representatives in attendance to offer support. 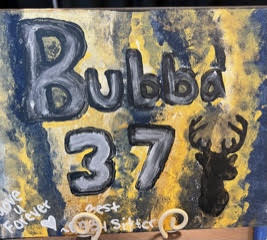