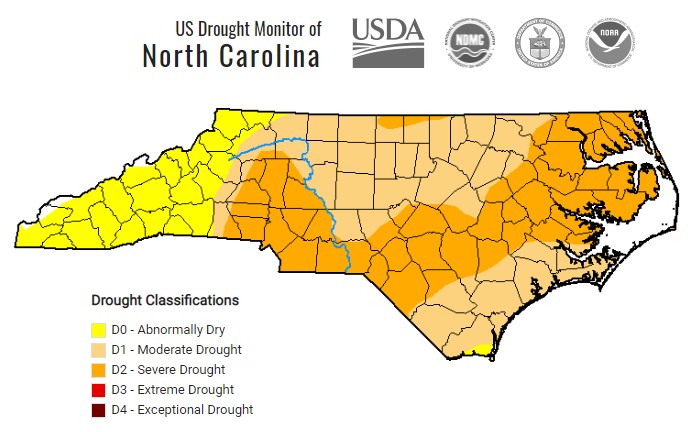 RALEIGH — North Carolina’s Drought Management Advisory Council (DMAC) has expanded its Severe Drought category for portions of the Blue Ridge Mountains through the Sandhills, most of the southern coastal plains, and along the entire eastern coastal area.

Severe Drought (D2 classification) now covers more than half of the state after another dry week added to precipitation deficits over the past three to six months. Severe drought is the second category of the four drought classifications based on the U.S. Drought Monitor. Last May, portions of six counties were briefly classified as severe. Prior to that time, severe drought occurred during the month of October 2019.

Other areas, such as the Triangle, Triad and Piedmont have been elevated to a Moderate Drought category (D1 classification), from last week’s Abnormally Dry designation (D0). The area east of the mountains that had been in the normal category previously has been downgraded to Abnormally Dry status.

Virtually all the State, except a few localized areas near the western Virginia border, are experiencing dry conditions based on factors including streamflow, groundwater levels, reservoir levels, soil moisture, and fire danger.

“Much of the state has been in a dry pattern over the past three to six months, with generally above-normal temperatures and few to no tropical systems bringing widespread rainfall relief,” said Corey Davis, assistant state climatologist with the N.C. State Climate Office. “The dryness has been especially pronounced since early October. Less than one inch of rain fell in most areas last month. It’s the driest November in 90 years in North Carolina.”

DMAC publishes its drought map every Thursday morning. It is updated and submitted on the Tuesday prior for inclusion in U.S. Drought Monitor. Any rainfall that occurs after 8 a.m. Tuesdays is considered in analyzing the following week’s map. However, the rain in the current forecast is not expected to make much impact on the drought status since it may only provide 0.5 inches to 1.0 inches which is the normal amount expected for this time of year. The gradual deficit in October and more extreme shortfall in November has resulted in many areas being four to seven inches below normal over the last three months.

The DMAC says current conditions and forecast models which reflect the warm, dry conditions that a La Nina weather pattern often brings, could lead to drought conditions continuing through the winter months.