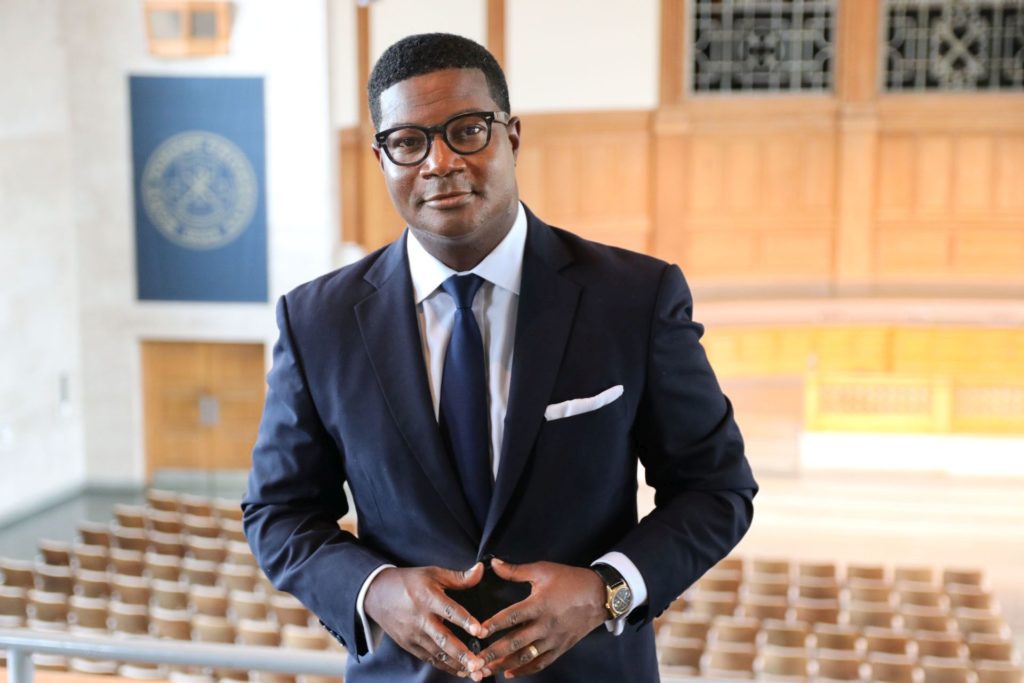 After a two-year break due to the pandemic, the distinguished Davis Lectures Series is returning this fall with Dr. Jonathan Lee Walton, dean of the Wake Forest University School of Divinity, serving as the guest lecturer.

His topic for the combination study, lecture and dialogue, is “The Misery of Merit,” based on the story in the gospel of Luke that tells of Jesus calling the first disciples. Walton will also preach at the 10 a.m. morning worship. Both events are open to the public.

“We are very excited to be able to host a Davis Lectures this year and especially to have Dr. Walton as our guest lecturer,” said Dr. Steve Shoemaker, pastor of Grace Baptist Church. “We were hoping to feature him for the 2020 Davis Lectures and are looking forward to providing the community an opportunity to hear Dr. Walton in person. He is an outstanding speaker and theologian whose topics are always extremely thought provoking.”

Trained as a social ethicist focusing on evangelical Christianity, Walton has been featured in several national and international news outlets, ranging from the New York Times, CNN and Time Magazine to ESPN, and the BBC. His latest book, “A Lens of Love: Reading the Bible in Its World for Our World” (Westminster John Knox Press) explores the Bible from the perspective of the most vulnerable and violated characters. Its aim is to underscore a tradition of Christian witness that privileges radical inclusion and social justice.

He is also the author of “Watch This! The Ethics and Aesthetics of Black Televangelism” (New York University Press). This work examines the impact of evangelical religious broadcasting on African American religious and political thought.

Walton earned his Doctor of Philosophy and Master of Divinity degrees from Princeton Theological Seminary. He served as the Plummer Professor of Christian Morals and Pusey Minister in the Memorial Church at Harvard University prior to his appointment at Wake Forest. Along with serving as the Dean of the School of Divinity, Professor Walton also occupies the Presidential Chair in Religion & Society and is the inaugural Dean of Wait Chapel at Wake Forest University.

Walton is married to Cecily Cline, a children’s book author, and they are the parents of three children—Zora Neale, Elijah Mays, and Baldwin Cline.

Grace Baptist Church started the Davis Lectures series 20 years ago to offer the community a concentrated study of scripture that includes current topics, serious inquiry and honest dialogue. In 2002, Dr. Richard T. Davis, a retired minister and chaplain from Durham, led the first series. In honor of his efforts and commitment to the endeavor, the congregation named the series for him and his wife – the Richard and Barbara Davis Lectures Series.

Located at 719 Club Drive, Grace Baptist organized in 1970 as a unique expression of church within the Southern Baptist Convention. The church withdrew from the Southern Baptist Convention in 1983 and is now aligned with the Alliance of Baptists, the Baptist Peace Fellowship of North America and Association of Welcoming & Affirming Baptists. For more information, email gracestatesville@gmail.com or go to www.gracestatesville.org.