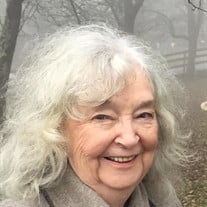 Sharon Lynn Pelchat passed away in her home on Friday morning, September 23, 2022, with her daughter Julia, son Craig and her caregiver present.

During her younger years, she spent time in both Indiana and Michigan with extended family. As a result, her Uncle Fred and Aunt Luella Huffman became very special influences in her life as well as her grandparents, Earl and Dora Miller.

She finished her high school education at Cherry Hill High School in Plymouth, Mich., where she met the love of her life, Roger John Pelchat II. She turned 18, graduated from high school and got married all in the same month of June in 1953.

Sharon and Roger wasted no time starting their large family, which included four sons and one daughter. They laid down roots in Novi, Mich., to raise their family in 1955 until their children were grown. They moved to North Carolina in 1987.

During the time in Novi, for the most part, Sharon was a stay-at-home mother. She did work out of the home for approximately 12 years at a local business, Radio & TV Reports, and advanced through the ranks to become manager of the sales group.

Sharon made her mark when she became very active in the community and the school district. She served as Den Mother with the Boy Scouts of America and Girl Scout Leader with the Girl Scouts of America. She served on several community committees that supported school fundraising events, festivals, campaigns and national and local elections committees. A standout in her community service was the election to serve on the Novi Community School Board of Education. Sharon was the first woman to serve on the Novi Board and the first woman to be president of the Novi Board. A highlight of her service was the year Novi High School was recognized as a “School of Excellence.” She and other members of the board were invited to the White House for a special presentation, and she met President Ronald Reagan. Sharon was re-elected four more times and spent approximately 16 years on the board, giving her the opportunity to not only give all five of her children their diplomas but their friends, to whom she was a second mother. She resigned, with a celebration board meeting, to move to North Carolina to join her family that had migrated through the years.

In North Carolina, with the exception of the loss of their dear son, Roger, in 1980, Sharon and Roger were fortunate to once again have their children near them. Their six grandchildren were all raised in North Carolina. Sharon created wonderful family celebrations for them and her children that will always be cherished. Sharon also became active in the community through the local elections committee and with her church, where she initiated a program to collect and donate necessities for local Veterans.
Sharon’s hobbies included porcelain doll painting, embroidery, antique collecting (especially pink depression glass), and reading, most fondly to her children when they were young.

Sharon will always be remembered for her love of family, loyal friendships, strong will and determination to make her community and the world a better place any way she could.

A Celebration of Life Service for Sharon will be held at 3 p.m. on Wednesday, September 28, at Cavin-Cook Funeral Home, 494 East Plaza Drive, Mooresville, NC 28115, with Rev. Nathan Finsel officiating. The family will receive friends from 1 to 3 p.m. prior to the service at the funeral home. Burial will immediately follow at Glenwood Memorial Park, 273 Glenwood Drive, Mooresville, NC 28115.

Contributions in the memory of Sharon Lynn Pelchat may be made to Fair View United Methodist Church, P.O. Box 27, Mt. Mourne, NC 28123

Cavin-Cook Funeral Home, Mooresville, is serving the family. Condolences may be made to the family at www.cavin-cook.com.