But not all council members were on board with the new arrangement.

“I would really feel more comfortable voting on this if we had more information about what our expected revenue will be for next year,” Council member Steve Johnson said. “This isn’t how you would buy a personal vehicle. You wouldn’t write the check and then see how much money you had.”

Council member Kimberly Wasson shared Johnson’s concerns and asked staff for more detailed information on the vehicles that were being replaced.

But City Manager Ron Smith voiced concerns about waiting until March or April when financial projections for fiscal year 2023-2024 would be available.

“We really have some police patrol vehicles that are in trouble,” he explained. “We don’t have the funding to purchase these vehicles that need to be replaced this year so we looked to other options. We had to. Otherwise, we can only afford to replace five vehicles, which pushes the remaining ten to next year, which pushes the ones scheduled for next year off even further.”

And even though he understood the funding concerns, Mayor Costi Kutteh agreed that replacing the vehicles should be a priority.

“We have been trying hard to improve the working conditions for our patrol officers, and getting newer, more efficient vehicles is a step in that direction,” he said. “Those patrol vehicles are the offices our patrol officers work in, and we want them to have better work space.”

The council voted 5-3 to approve the proposed agreement with Enterprise Fleet Management. The city will lease 15 new vehicles, including: 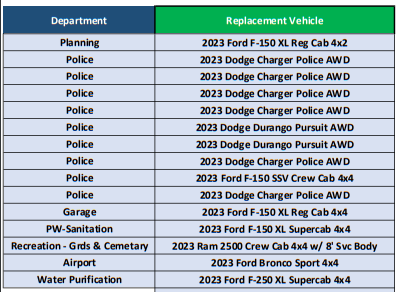 In other business, the council:

♦ Recognized the Financial Division for Distinguished Budget Presentation Award from the Government Finance Officers Association; and

♦ Honored Recreation & Parks employee Stacie Kennington, who was recently named the Carlton Harris Tennis Professional of the Year Awardl. She was awarded the honor for going above and beyond both on and off the court and promoting United States Tennis Association’s programs and mission.