The Statesville City Council seemed receptive Monday to the idea of establishing a downtown social district where adults can purchase to-go alcoholic beverages from ABC-permitted businesses for consumption in public areas and inside participating retail shops.

DSDC will work with city staff to draft an ordinance establishing the district in the coming weeks. The council, which will hold a public hearing before voting in the matter, can amend that ordinance in any way it sees fit.

Municipalities throughout the region — including Mooresville, Hickory, Salisbury and Charlotte — and across the state have been establishing these social districts since the N.C. General Assembly authorized their creation last September.

The impetus for the legislation was a desire to help local businesses recoup some of the economic losses incurred during the COVID-19 pandemic.

Joe Bondi, owner of Red Buffalo Brewing Co. on Center Street, said he supported the creation of the social district for that reason.

“The retailers are suffering,” he said. “If we can get more foot traffic downtown it helps everyone.”

Under the preliminary parameters outlined by DSDC Director Brittany Marlow, the social district’s hours of operation would be 12 noon to 10 p.m. seven days per week.

To-go drinks would be sold in specially-marked cups, and there would be signage throughout the district letting folks know where these beverages can be consumed.

The proposed district covers most of the core downtown area. The four churches and the parking lot between the Payne Chiropractic Building and Broad Street United Methodist Church were excluded.

City officials will also ask Iredell County officials if they want county property to be excluded from the district.

Council members also asked Marlow to reach out to the churches in the downtown area for their input on Sunday hours. 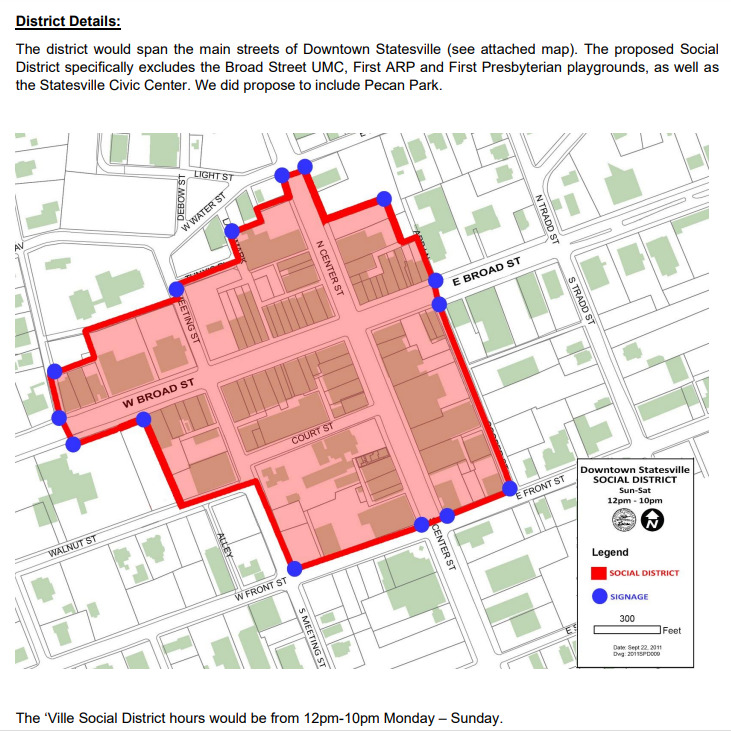