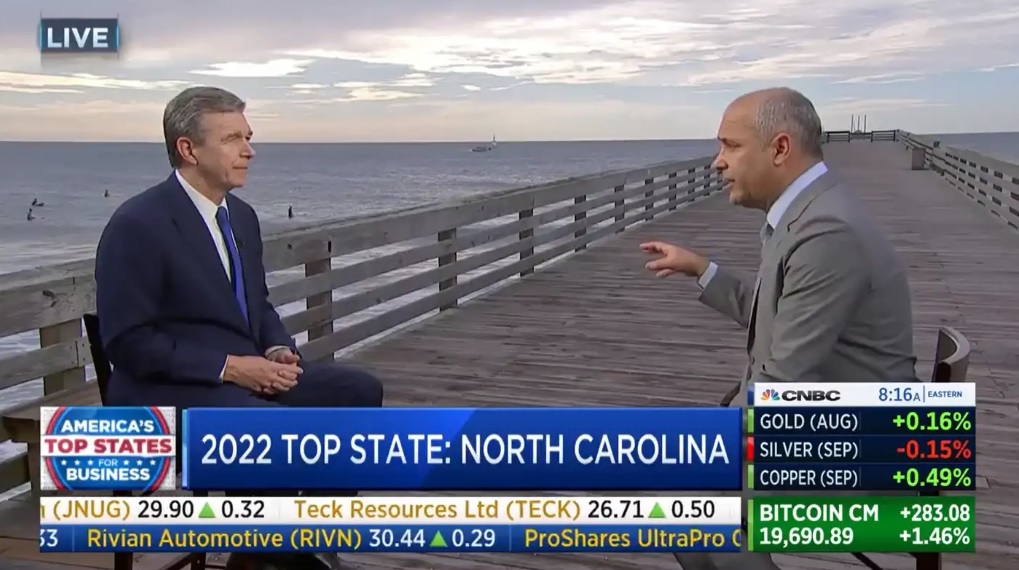 RALEIGH — Under Gov. Roy Cooper’s leadership, 2022 was a historic year for North Carolina with a record number of new jobs announced, meaningful progress in the continued transition to a clean energy economy, and historic investments in infrastructure, child care and broadband across the state.

As North Carolina emerges from the pandemic even stronger than before, the governor is laying the foundation for future generations and building on strong momentum heading into 2023.

“This year, we’ve made once-in-a-generation investments to help our families and communities grow and thrive,” Cooper said. “Our progress has made sure our state continues to be the best place for people to live, learn, work and raise a family. I’ve never been more excited about North Carolina’s future.”

Here are some of the major milestones in North Carolina during the past 12 months:

Cooper announced a record number of jobs in every corner of the state and CNBC ranked North Carolina as the top state in the country to do business in 2022.

As a result of the state’s focus on strengthening the workforce while leading the transition toward a clean energy economy, CNBC named North Carolina the top state in the country to do business. It’s been a historic year that brought a record-breaking number of jobs to every corner of North Carolina, with over 28,300 jobs announced.

The governor is focused on making higher education more affordable and accessible to strengthen its workforce ahead of tens of thousands of new jobs coming to the state.

In partnership with North Carolina’s community colleges, the Cooper launched the Longleaf Commitment community college grant program to help strengthen our talented workforce. The grant program provides recent high school graduates from low- and middle-income families the opportunity to receive at least $2,800 in federal and state grants to cover tuition and most fees at any of the state’s 58 community colleges. These grants are helping students continue their education debt-free, so they can take on the jobs of today and tomorrow.

More than $15.9 million in Longleaf Commitment grants have been distributed to over 25,700 students across the state using GEER funding and NC General Assembly appropriations since the program started.

North Carolina is moving toward a clean energy economy and already seeing results with strong, new jobs in every corner of the state.

In January, the governor issued Executive Order No. 246 affirming North Carolina’s commitment to a clean energy economy and directing next steps in the state’s plan to achieve net-zero greenhouse gas emissions while creating economic opportunities for all North Carolinians, especially in underserved communities. In November, Cooper signed Executive Order No. 271, helping the state prepare for the move to zero-emission electric vehicles (ZEVs).

The potential for reliable, affordable offshore wind energy in North Carolina to grow the economy and benefit the environment has never been stronger. This year, the N.C. Taskforce for Offshore Wind Economic Resource Strategies (NC TOWERS), established by Cooper, held meetings for community members and stakeholders to advise on programs and policies for developing offshore wind energy projects. Cooper toured Dominion Energy wind turbines off the coast of Virginia and explore the potential of bringing them to North Carolina.

This year, the Governor announced that electric boats, planes and vehicle manufacturers are bringing thousands of jobs to the state. Wolfspeed and VinFast announced they will build plants in Chatham County, Boom Supersonic will build its manufacturing and final assembly facility in Guilford County and Forza X1, an electric boat manufacturer, will establish its new manufacturing plant in McDowell County – all of which will create over 11,200 jobs in North Carolina.

North Carolina is making once-in-a-generation investments in critical infrastructure that will allow communities and the economy to grow and thrive.

North Carolina is investing $2.3 billion in water and wastewater infrastructure to ensure communities have access to clean drinking water.

High-speed internet is critical for people to work, learn, connect and access health care, and Cooper is working to close the digital divide.

This year, North Carolina awarded over $270 million in Growing Rural Economies with Access to Technology (GREAT) grants to providers. Almost 110,000 households and more than 3,600 businesses will receive access to high-speed internet thanks to this funding.

The state has also partnered with the Biden Administration to close the digital divide across North Carolina. In December, the U.S. Department of Treasury announced that North Carolina was approved to receive $177.7 million for broadband infrastructure to connect an estimated 78,100 households and businesses. The North Carolina Department of Information Technology will use the award to fund the Completing Access to Broadband (CAB) program.

Child care lays the foundation for future success and helps parents stay in the workforce. Cooper has worked to strengthen access to child care for families, provide much-needed support for facility updates and increase pay for child care workers.

Since the NC Child Care Stabilization Grants program was launched in 2021, the North Carolina Department of Health and Human Services has distributed more than $743 million in grants to over 4,300 child care centers statewide to raise preschool teacher pay while helping children learn and parents stay in the workforce.