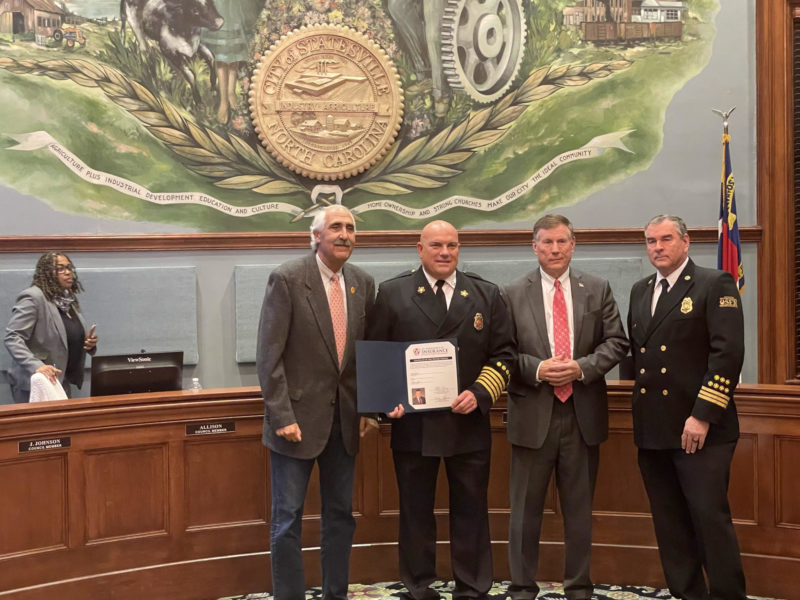 The Statesville Fire Department has earned a Class 1 ISO Rating, elevating the department to the ranks of elite fire service agencies across the state and nation.

N.C. Insurance Commissioner and State Fire Marshal Mike Causey recognized the SFD for achieving this designation, which he said represented the “pinnacle” of the profession, during Monday night’s Statesville City Council meeting.

“It’s a team effort,” Causey said. “It takes a lot of work to get to this level.”

As a result of this rating, commercial property owners will receive the lowest premium possible on this area of insurance, with an average savings of 8.5 percent.

♦ City Manager Ron Smith praised 14 members of the Water & Sewer Department who sacrificed time with their family over the Christmas holiday weekend to help residents dealing with frozen pipes as a result of below-freezing temperatures. The city handled more than 240 calls for service and made repairs to nearly a dozen city waterlines. City staff also helped connect residents with local businesses who could assist with line breaks on private property.

♦ The council approved the sale of three vacant properties to Habitat for Humanity of the Charlotte Region for a total of $9,950. The nonprofit plans to construct affordable housing on the lots at 525 S. Tradd Street, 553 S. Tradd Street and 416 Van Buren Street. The properties are being sold at tax value.

Habitat plans to build four single-family detached dwellings to be sold to households making 80 percent or below of Iredell County’s Area Median Income. N.C. General Statute 160A-279 allows the sale of municipal property without a competitive bidding process when sold for the purposes of building affordable housing.

♦ Mayor Costi Kutteh proclaimed January 16, 2023, as Martin Luther King Jr. Day in recognition of the life and legacy of the civil rights icon.

♦ Council members granted permission to the Statesville Police Department staff to apply for a grant from the N.C. Governor’s Crime Commission Federal Violence Against Women Act for up to $135,000 for the purpose of supporting the department’s Domestic Violence Initiative. The grant would fund a Victim Advocate and two Domestic Violence Investigators salaries, fringe benefits, supplies, and training.

♦ The council authorized the Statesville Police Department to apply for funding from the N.C. Governor’s Highway Safety Program that will provide fourth year continuation funding of 50 percent of the $142,950 budget for fiscal year for salaries and travel/training for two officers in the amount of $71,475, and the required 50 match from the City of Statesville of $71,475 for this fourth and final year of funding.

♦ Council members approved the renewal of a contract with Leah Gaines Messick to continue as the Statesville City Attorney. Under the terms of the contract, the city will pay Messick a retainer of $1,000 per month. This will cover attendance at the regular council meetings and the normal preparation involved for said meetings. The attorney will charge an hourly rate of $150 per hour for all other services for which there is not an agreed upon fee.

♦ Council members approved the first reading of the annexation of 34 acres on Candy Drive.

♦ The council approved a conditional rezoning for 35 acres located at 2507 and 2511 Newton Drive. A developer is planning 95 single-family homes in the development, which will include 10 acres of open space and a section of greenway.