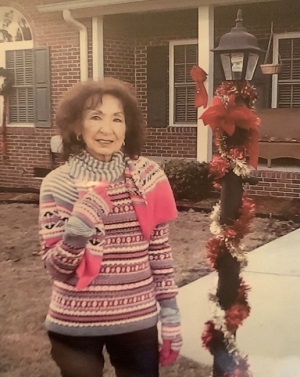 Brenda Joyce Wright Redmond passed away peacefully on Thursday, December 12, 2019, at Lexington Medical Center from complications relating to an infection and prior health involving her heart. She was the daughter of the late James L. Wright and Willy L. Wright. In addition to her parents, she was preceded in death by a brother, James L. Wright of Belmont, N.C.

She was a military wife of the late George (Lucky) H. Rayfield for 15 years. She worked in retail fashion in the early 1980s to 90s with Belk and small boutiques in and around North and South Carolina. She moved her career forward to the home health care profession. She was a member of Open Door Baptist Church. Brenda was a devout Christian and would always go above and beyond the call to help anyone in need. She was an example of what is good and pure in this world.

Her legacy will continue to flourish within the grandchildren she cared and loved so deeply about and the sons, husband, relatives and friends she has left behind. In reference to John 11:25-26: Jesus said unto her, “I am the resurrection and the life: he that believeth in me, though he were dead, yet shall he live: And whosoever liveth and believeth in me shall never die.”

A Memorial Service will be held on December 21, 2019, at 2 p.m. at Bunch-Johnson Funeral Home, 705 Davie Avenue, Statesville, N.C. The family will receive friends from 1 to 2 p.m. prior to the service.

Bunch-Johnson Funeral Home is honored to be serving the family of Brenda Redmond.