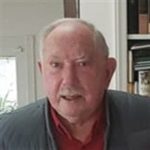 It is with great sadness that the family of Richard Herman Nixdorf of Mooresville, age 79, passed away peacefully at his home on December 20, 2019. He is survived by his loving wife Ruth of 54 years. Richard and Ruth met in 1961 at the University of Maryland and were married in June 1965 at the cadet chapel in West Point, New York.

Richard is also survived by one son, Fred; two grandchildren Jennifer and Cody; and one great granddaughter. He was born in Easton, Maryland, in February 1940 to Herman Emil Nixdorf and Margaret Hoffman Nixdorf, and brother to Doris Ann Sparks and Herma Benjamin. From the age of two to 18, he resided in the small town of Claiborne on the eastern shore of the Chesapeake Bay.

Richard and Ruth enjoyed square dancing with the Spinning Moors for 20 years. He also supported wildlife organizations his whole life and was an avid bird watcher.

He had many interests and hobbies, including making wine, gardening, home improvements and making projects in his wood shop. He was truly a man who could fix or build anything. No public memorial services will be held, just a gathering of close family and friends at home.

Cavin-Cook Funeral Home, Mooresville, is serving the Nixdorf family. Condolences may be made to the family at www.cavin-cook.com.