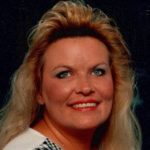 Sandra Diane Sowers McInnis, 55, of Cleveland, N.C., died December 23, 2019, at her home. Born in Iredell County on December 9, 1964, she was a daughter of Eugene Sowers, who survives, and the late Annie Upright Fox. She was a disability retired Medical Technician and on October 10, 2010, she married Randy Lee McInnis, who survives.

She was preceded in death by two brothers. Also surviving are five half-brothers, a sister, and a half-sister.

Services celebrating Sandra’s life will be conducted at 7 p.m. on Sunday, December 29, 2019, at Nicholson Funeral Home with Rev. James Lewis officiating. The family will greet friends following the service.

In lieu of flowers, memorial donations may be given to the benefit of the family to Nicholson Funeral Home, 135 E. Front Street, Statesville, NC 28677.