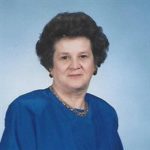 She was born April 14, 1932, in Old Fort, N.C., the daughter of Edgar William Shepherd and Era Estelle Gilleland Shepherd.

She was a 1953 graduate of The Presbyterian Hospital School of Nursing and was a registered nurse for 40 years.

Barbara was retired from JC Penney Warehouse and was an active member of Saint John’s Lutheran Church.

Gran Bobbie, as she was affectionately known to her grandchildren, will be most remembered for her enduring, steadfast love for family, church, and neighborhood, including all feathery and furry friends.

Due to covid-19 protocols memorial services for Barbara will be determined at a future time. In the interim, the family encourages everyone to share stories and remembrances at www.nicholsonfunerals.com.