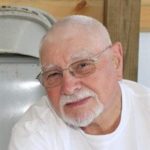 Gus (Roy Adams) Dingler, 89, went to his heavenly home Monday morning, April 13, 2020, surrounded by his loving wife and daughter. Gus lived a long life full of love and excitement, even though two years ago he was diagnosed with prostate cancer.

If you knew Gus Dingler, you knew he had a love for the game of Baseball and Softball. He and his brothers grew up playing baseball at Moor Park (now home of the Spinners). He played Softball up until the age of 79 and was the pitcher. He also coached many years the Women’s Softball Team at Church. The New York Yankees was his baseball team. He had the pleasure of seeing many games in Spring Training, which he enjoyed attending with his wife JoAnne and grandson Jeremy. Just last August he and Jeremy were at a Yankees game. He also enjoyed going to the Mooresville Spinners games. Gus and his daughter Sissy attended home games and away games. Another team he admired was the Duke Blue Devils basketball team. Anytime the TV was on at their house it was associated to some kind of sports. He also spent many years enjoying NASCAR, attending many races at several different tracks.

After he retired from the Town of Mooresville, his “new office” became Shop and Save. He was there every morning sitting around enjoying all his friends. He was just an all-around guy who knew everyone or got to know them. He enjoyed the sport of hunting whether it was rabbit, squirrel, or deer. He had many more friends who he shared the love of hunting with.

He was a lifelong member of Shearer Presbyterian Church, where he was involved in Mission Trips. He and his daughter Sissy went several times together to Mexico and even took his grandson Jeremy along on two of those trips. His love for the Lord shone in his spirit of life every day.

Gus was preceded in death by his parents, brothers Robert (Bob) and Bill Dingler, his beloved son-in-law, Jimmie Farrington, and many special friends, but in particular Kevin Smith.

Gus is survived by his loving wife of 62 years, JoAnne H. Dingler; his devoted daughter, Sissy (Sharon) D. Farrington; his son, Rickie “Footsie” H. Dingler and wife Pam; grandson Jeremy H. Dingler and wife Tiffany, their two children, his great grandchildren, Addison and Cole; granddaughter, Jessica E. Dingler, and her boyfriend Coty Edwards; and step-granddaughter Khristin Meyers and David. He is also survived by a special person whom he considered a granddaughter, Nicole S. Farnsworth and husband Russ, their sons, Levi (who they kept from six weeks old), Luke, and Evan. Pappy and GG counted these kids as their great grands, which together with the other two they had a nickname for them, the fabulous five. They will miss their Pappy so much. He is also survived by his brother Charles Dingler and brothers-in-law and sisters-in-law along with many nieces and nephews.

The family will receive friends on Wednesday, April 15, from 5:30 to 7:30 p.m. at Cavin-Cook Funeral Home. A graveside service will be held at 2 p.m. on Thursday at Shearer Presbyterian Church Cemetery with Rev. Dr. Stephen Stout officiating.

Daddy, thank you for all you taught me, but mostly for always holding my hand. From Friday night dates to Mooresville High School football games to baseball games or wherever else I wanted to go, you were right beside me. The memories I have are the greatest a girl could ever get from being a “Daddy’s Girl.” I Love You Always.

Cavin-Cook Funeral Home & Crematory, Mooresville, is serving the Dingler family. Condolences may be made to the family at www.cavin-cook.com.